The World Will Break Your Heart (Self-released, 2020) 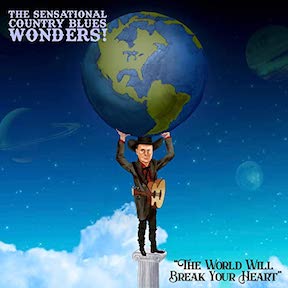 The Sensational Country Blues Wonders! is the moniker for singer-songwriter Gary Van Miert of Jersey City, N.J. This eccentric character has a natural facility for crafting solid country songs with clever word play ("I'm playing second fiddle to a steel guitar. My lover jumps around from bar to bar.") even though his view is more umbrella-like – at the intersection where blues, country and gospel meet in that triangle defined by Nashville, Memphis, and New Orleans. If he has a model artist, it is surely Elvis.

Prior to the pandemic, Van Miert was deriving most of his livelihood from live performances, so he had to reinvent a way of keeping his music alive. He had written several original songs, knew how he wanted them to sound and sent the vocal and guitar demos to Nashville Master Tracks instructing them on which instruments to use for each song. So, yes, this is a pandemic record, one made without Van Miert leaving his house.

This is his first album of original material, an attempt that reaches back to classic country from the '50s and '60s, nods to gospel and even bluegrass ("I Won't Change Anything (My Oh My.') Oh, there are a couple of blues tunes here too. There's the ragtime-like "Double Barrel Blues" and a Chicago-like blues harp infused "I'm a Heartbreaker." There's the tongue-in-cheek "I'm Afraid of Every Goddamn Thing," the waltz-like "When Your Heart Is Blue," a touch of punk in "Love Murders Your Heart" and even the hilarious honky tonk modern-day murder ballad, the album standout "My Baby Stabbed Me With a Steak Knife." He clearly loves the music but his knack for not taking himself too seriously, applying an almost stand-up comic approach is what makes the album work as well as does.