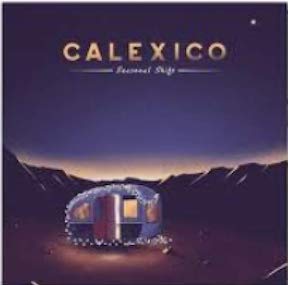 Calexico's "Seasonal Shift" is a delightful new holiday album, even though you may not recognize some of its songs nor speak the language for some of its lyrics. As is always the case with Calexico projects, this collection is eclectic. More than that, though, it's extremely heartfelt.

A couple of rock songs are covered on it. One, "Christmas All Over Again," sounded trite when it's original performer, the late Tom Petty, recorded it. However, here the song is infused with new, jangle rock energy. Also, the cover of "Happy Xmas (War Is Over)" is immediately bettered by excluding Yoko Ono from the vocal.

There aren't any popular church hymns or familiar TV Christmas songs contained within. Instead, songs like "Seasonal Shift" and "Nature's Domain" put more of an environmental spin on the holiday season. One especially fun entry is "Mi Burrito Sabanero, which Gaby Moreno sings joyfully in Spanish. You don't even need to know what the words mean to get a kick out of this one. Perhaps the weirdest track of all is "Sonoran Snoball," which sounds like a cross between a children's choir and a vintage video game.

"Peace of Mind" is a quietly meditative, guitar-strummed song. Its lyrical cry for peace of mind during the holidays is a mantra that might fit for all of 2020. Yes, "Seasonal Shift" doesn't play Captain Obvious with its track selections. Nevertheless, it creates a quietly peaceful mooand is enjoyably effective throughout.