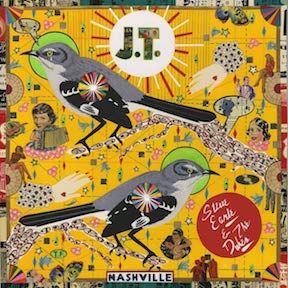 When a child buries a parent, it's the natural order of things. The old make way for the young, hopefully content that they have passed along enough wisdom and strength of character to help them survive and prosper. But when a parent buries a child, the natural order is subverted in tragic fashion as an almost impenetrable grief grips the parent, a spiraling descent into an unfillable void of physical loss, unrealized potential and profound regret, whether justified or not.

Steve Earle was thrown into this emotional maelstrom in August 2020 when his son Justin Townes Earle died after an inadvertent overdose. The single bright spot in this bleakest of human experiences was the fact that father and son shared an exquisite talent for songwriting; much like a parent's scrapbook provides a modicum of comfort at a time like this, Justin Townes Earle's recorded legacy offered his father a degree of solace in his pain.

Admirably and unbelievably, Steve has channeled his unspeakable loss into a marvelous tribute to his late son in the form of "J.T.," a set of 10 covers drawn from Justin's estimable catalog capped by the elegiac ending, the Steve Earle original "Last Words." Wisely and perhaps necessarily, Earle didn't turn "J.T." into a funeral march, preferring to divide the set list between celebratory exuberance ("Harlem River Blues," "I Don't Care," "Champagne Corolla") and somber contemplation ("Turn Out My Lights," "Lone Pine Hill," "The Saint of Lost Causes").

"Last Words" closes the album as proof of Earle's contention that making "J.T." was therapeutic but not cathartic; Earle speaks candidly about his son's inescapable pain ("I don't know why you hurt so bad, just know you did and it makes me sad/I said everything I need to say, could not make it go away") and their final phone conversation ("Last thing I said was 'I love you,' your last words to me were, 'I love you too.'").

In translating his son's songs on "J.T.," the proceeds from which will be donated to Justin's three-year-old daughter Etta, Steve Earle has hopefully found some small measure of peace, but his greatest act of courage has come from sharing his journey with us.

CDs by Steve Earle & The Dukes