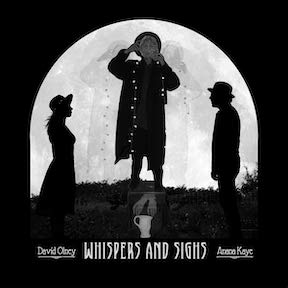 With the passing of David Olney in January 2020, "Whispers and Sighs" serves not only as a posthumous tribute to the singer/songwriter, but as a document that his gift remained intact until the end. Olney shares the spotlight and co-wrote all tracks with Nashville-based singer/songwriter Anana Kaye with contributions from Irakli Gabriel and John Hadley.

Olney is most compelling on ballads such as "Behind Your Smile" with the hopeful observation that "A stranger is a long lost friend," as well as "The Great Manzini (Disappearing Act)" that deals with the complexity of relationships ("Love is a disappearing act/Mirrors and smoke and dreams"), and while the song was written in 2018 the lines "The city's under quarantine/And I can never leave" pack additional potency in the era of pandemic that began shortly after Olney's death.

Olney rocks out nicely on "Lie to Me, Angel" featuring Gabriel on electric guitar and the shared vocal with Kaye on the apocalyptic "Last Days of Rome" in which he raps "This one's for the dreamers/Who won't dream anymore."

Kaye takes the lead on the title track with an allusion to Shakespeare ("Standing alone in the shadows/You were Romeo falling in love/It was worth being star crossed/On a night full of whispers and sighs"). With the ballad "Tennesee Moon" Kaye acknowledges the fear of uncertainty ("Give me faith in the unknown/Before you fade into the dawn"), while "My Last Dream of You" confronts the confusion that can result in the aftermath of a breakup ("How do you know if you're dreaming/When everything seems so real").

The rocker "Thank You Note" deals with the despair of a breakup ("I've survived a plague in the 15th century/But I can't survive the thought of losing you"). The ballad "Why Can't We Get This Right" is about repeated mistakes ("Here we are again where we've always been/Caught up in the same old movie scene").

Produced by Brett Ryan Stewart with Olney, Kaye and Gabriel , "Whispers and Sighs" is not only a fitting swan song for Olney, but for many a powerful introduction to Kaye.