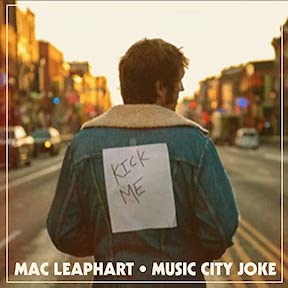 Nashville-based, South Carolinian singer-songwriter Mac Leaphart is a storyteller of first order, evoking John Prine and Hayes Carll. It's perhaps no coincidence that Carll's producer, Brad Jones, is at the helm for Leaphart's "Music City Joke," filled with wry humor, plenty of twang, and songs made for drinking in honky-tonks and dives, many of which could be where Leaphart has spent the past decade honing his songcraft.

Leaphart has a similar talking blues approach as the two artists cited above. Yet, as casual as it comes off, Jones and Leaphart have tapped some of Music City's best serious musicians in Fats Kaplin, Will Kimbrough,and Matt Menefee.

The album's pedal steel fueled title track, where he even mentions Prine, is self-deprecating as the South Carolinian born-and-raised Leaphart explains, "I was attempting to make it big as a writer of some of those big country hits you hear on the radio, and it wasn't too long before I realized writing those smash hits wasn't easy, and I wasn't chuckling at Nashville anymore. Nope, the joke was on me."

He begins with a reimagined version of "El Paso Kid," from his 2015 release, "Low in the Saddle, Long in the Tooth." As he settles into "The Same Thing" Kaplin's fiddle provides the backdrop for his mournful vocal. "Blame on the Bottle," inspired by a preacher on the left end of the radio dial, and the rollicking "Honey, Shake" are perhaps the best examples of his radio friendly material.

"Ballad of Bob Yamaha or A Simple Plea in C Major," filled with clever wordplay, is an ode to Shel Silverstein, written from the perspective of a weathered guitar that just wants to be played by someone who has mastered the instrument. The upbeat "That Train" mixes twang, tempo and tightly rhymed lyrics, proving that he has mastery of songcraft, guitar playing withstanding. "Window From The Sky" is another of his stripped-down perspectives while "Every Day," with some of the best harmonies, surveys the dynamics of a relationship. The closer, "Division Street," sung fondly, most surely points to his hard scrabble past, living in a shared apartment, which invariably became "the party house." It's fair to say that Leaphart has arrived, apparently not by leaps, but by incremental steps. Nonetheless, this step is the biggest one.