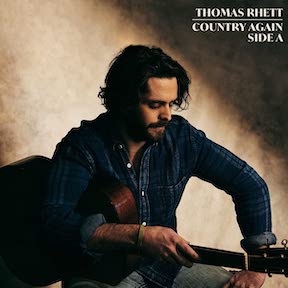 Thomas Rhett is in the artistic zone. Rhett Atkins' boy never really struggled to get noticed, but starting around 2015, his impact went nuclear – "Die A Happy Man" wasn't just a number one, but a monster that stayed there for two months. The ACM Award for Entertainer of the Year still carries a lot of weight, and Rhett nabbed it in 2019.

Still, Rhett's sound has its doubters – a lot of the air-quote country hits were grafted to other dance, pop and soul styles. Listen to "Look What God Gave Her," and Justin Bieber could easily substitute on the pop/R&B smoothie. "Craving You" with Maren Morris (another artist that keeps her genre options open) would fit right in at the nightclub. Rhett knows he's strayed off the reservation, and this record is his reapplication for his own job as a country singer.

With its cheeky title of "Country Again Side A," Rhett proves that he did indeed grow up with trucks, cold ones and fishing poles. It's a full-sized album, and yes, there will be a second "Side B" set coming later. There's a great interplay between personal statements ("Country Again") and anthems for the rest (the single "What's Your Country Song").

It's certainly not an acoustic record, and the Sam Hunt flow is still on display ("Put It On Ice" with Hardy). But with more fiddle and six-string forward in the mix, these are far more simple recipes than the monster productions of "Life Changes". Rhett seems to be happy with the downshift, and it's easy to enjoy him enjoying himself. It's got winning, relatable details of real life atop toe-tapping grooves – there's really not a clunker in the bunch. Even a fan favorite from concerts, "To the Guys That Date My Girls," finally gets its place on record.

Is it all too reflective? Maybe – there's a song called "Growing Up" only two removed from "Where We Grew Up." The former is an homage to Eric Church, pickpocketing the melody of "Springsteen." But it's that groovy gunslinging of Rhett's delivery that makes it sound so damned earnest. And you don't need to know his backstory (e.g., he was in the middle of adopting a daughter from Africa when a prayed-for biological daughter arrived) to be moved to tears by "Ya Heard." This is one of the finest direct address to God songs ever penned, and he makes it sound easy. It's peak production time for Rhett, and there doesn't seem to be much he can't do – even country music. Who knew?