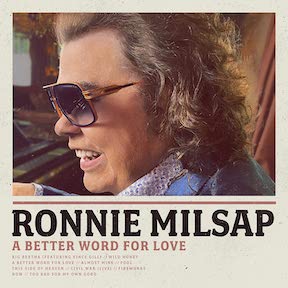 There was a time when Ronnie Milsap's soulful approach to making country music was controversial. Some thought he was too pop. However, compared to contemporary country music, Milsap now sounds more traditional than ever. No matter where Milsap has fit along the country spectrum, though, he has always been a great singer. Now, with "A Better Word for Love," Milsap's voice sounds like it hasn't diminished even one little bit.

Listen to the way Milsap sometimes growls during the horn section and steel guitar-powered "Fireworks," and you'll hear proof. This track is one of multiple upbeat recordings on Milsap's sparkling new album. The release opens with Milsap's collaboration with Vince Gill on the swinging "Big Bertha." However, Milsap didn't need added star power to make this collection shine. "Wild Honey" follows "Big Bertha" for a quick second dosage of rollicking, bluesy music.

Although "Civil War" is on the quieter side, it's no less impactful. Its lyric relevantly bemoans our country's cultural/political divisions. Americans may disagree on many things, but we all agree we'd sure like to be less divided.

Although Ronnie Milsap is closing in on 80, he sure doesn't sound like it. Yes, the craziness of today's music business has caused many musical veterans to lose heart. Milsap is not one of these, though, because he is at the top of his game and still having fun.