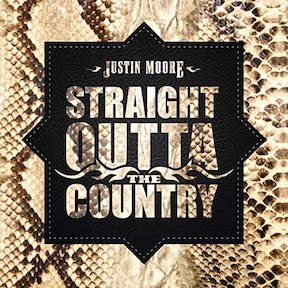 Justin Moore said of "Straight Outta the Country" that if fans loved 2019's "Late Nights and Longnecks," they would love this one. It makes sense. His sixth studio album is effectively the spawn of his 2019 chart topper. Moore said, "We had three times as many songs as we put on the last album. This one is an extension of that."

Few artists walk the line between traditional and contemporary country as well as Moore, and he plays the role of country music's champion of the everyman on this effort. The eight tracks - Moore had writing credits on five - weave through the importance of family, love, doing the most with what little you have and the simple joy of being alive,

"Hearing Things "is an ode to the sounds of country life while living in a big city.

The lead single ("We Didn't Have Much") espouses plastic Tonka Trucks, pistol cap guns and Sunday chicken. There are acoustic and electric versions. Jeremy Stover's production is spot on as he navigates both with aplomb. Sonically, the melodies range from an upbeat and glossy to the hard driving title track; a Brantley Gilbert-style rocker whose heavy guitar and booming drums forcefully convinces the listener of Moore's country cred much like "Straight Outta Compton" defined NWA's gangsta rap.

Given the large number of songs he readied for this album, he teased the possibility of another release perhaps in short order. Whether it leans more toward traditional or contemporary, Moore has proven that he can pull them both off.