Lara Hope and the Ark-Tones 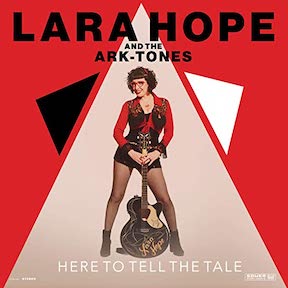 Hudson Valley, N.Y. might not be the first place one would look to find an authentic rockabilly band, but devotees of this genre are likely already familiar with the quartet, Lara Hope & The Ark-Tones, who now deliver their third and most fully realized album yet. Rockabilly contains a hybrid of styles ,and Hope's unit embraces not only vintage rock n' roll and country, but slight hints of surf, western swing, R&B and punk as well. As one can easily glean from the back cover photo, Hope is an eccentric character dressed in black and red with signature red cat-eye frames and her all red dressed band poised behind her, as if ready for takeoff.

And yes, they indeed explosively lift off with "Let's Go" as upright bassist Matt "The Knife" Goldpaugh and lead guitarist "Shreddie" Eddie Rion add the kick of Hope's vocals and rhythm guitar with all three members, including ever steady drummer Jeremy Boniello, adding background vocals. This danceable groove continues with "Stop, Drop & Roll," but the band takes a more controlled yet still raucous form, especially in Rion's blistering guitar break, on the title track. "Some Advice" shows their wit, replete with humorous voicemails from Hope's mom to the younger generation. The sax on that one is from guest Hayden Cummings of the Kings of Nuthin'.

The band shows some versatility on the haunting ballad "It's a Crime" where we hear Cummings underneath on the bari sax and keyboardist Matt Jordan, sideman to Stray Cat Lee Rocker and Reverend Horton Heat, two acts that Hope and Ark-Tones often tour with. "Knocked Out" brings some western swing while buoyed by barrelhouse piano. "The Art of Asking" proves again the band can instantaneously shift tempos and mood at the drop of one beat. The closer "Drink to Your Health" introduces a chorus of a dozen plus background vocalists as the band goes out in their vibrant, joyous style. This is just pure fun and great driving music. Just be careful to watch for the blinking lights in your rearview.

CDs by Lara Hope and the Ark-Tones