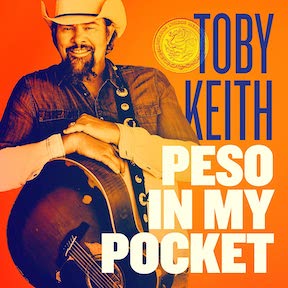 Toby Keith's core competency is traditional country, and he remains true to it that sound on "Peso in My Pocket," his first studio album in six years and a spawn of the pandemic. One of the first things you notice are the songwriting credits. The Warrren Brothers, Maren Morris and Ryan Hurd help populate part of the roster. The album leads off with It leads off with the catchy regional favorite "Oklahoma Breakdown," it is followed by an ode to better times on "Old School."

His signature baritone is unmistakable and in fine form throughout. The only misstep, and it's a big one is the title track. It is in the same vein as an R-rated "Red Solo Cup" "I Got a peso in my pocket, got a pepper in my pants" (really?). It seems lewd and unnecessary. Redemption is found later when puts a heavy dose of country swing on the John Prine/John Mellencamp cover "Take a Look at Me."

Sonically, it ranges from breezy to gritty and is consistent with the rest of his catalog. What would a Toby Keith album be without social commentary? The closer, "Happy Birthday America" is a rollicking rebuke on the state of the nation and the incredulity of what it has become, much like the genre itself.