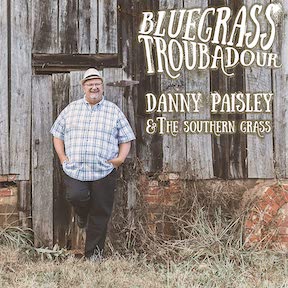 As the old line goes, look up the term "Bluegrass Troubadour" in your dictionary, and you're likely to find Danny Paisley's picture. By his teenage years in the 1970s, he was already a professional bluegrass musician, singing lead and backup in the Southern Mountain Boys, a band from the Delaware/Pennsylvania/Maryland region fronted by his father Bob Paisley and the powerful banjo player Ted Lundy. As the years went on, and following Lundy's passing in the early 1980s, Bob Paisley and The Southern Grass became standard bearers for the hard-core, traditional brand of bluegrass, and the electrifying father-son vocal combination of Bob and Danny was the core of that sound.

Following Bob's passing in 2004, Danny continued the tradition, often with his band including Ted 's sons Bobby and T. J. Lundy (bass/banjo and fiddle, respectively), and a decade later Danny's own son Ryan Paisley joined the "family business" as a teenaged mandolin talent. Although some in the bluegrass world have fretted that the no-holds-barred traditional brand of the music is on its way out, Danny Paisley has proven that there's still a market for the vintage, "high proof" stuff, and he's got two IBMA Male Vocalist of the Year awards on his mantle to prove it (including the current one). This latest album should be good enough to get him at least close to the "hat trick" in the next round.

In addition to Bobby Lundy (bass) and Ryan Paisley (mandolin), the supporting cast includes Matt Hooper on fiddle along with Mark Delaney, a solid banjo player grounded in the Scruggs/Crowe/Emerson approach to the craft, and all help out with the harmony for a mix of vocal and instrumental prowess and excellence that matches that of the Southern Mountain Boys era. The centerpiece, of course, is Danny's piercing, hard-edged lead singing that is especially effective on older, traditional material like "Eat At The Welcome Table" as well as early country tunes like the gospel-tinged "I'd Rather Live By The Side of the Road" by '20s-era writer Albert E. Brumley.

In recent years, though, Paisley has shown a knack for distinctive interpretations of material by contemporary bluegrass writers, highlighted here by "Blink Of An Eye" (Bob Amos) and a pair of tunes by Eric Gibson of the Gibson Brothers, "He Can't Own Them" and "I Never Was Too Much." There's also a new take on "Forty Years of Trouble," written by one of Danny's early influences, Troy Spencer that he's previously recorded on his own and with his dad. It's a tune that never gets old, and it sounds as fresh as ever this time around. In like fashion, Danny Paisley is still rooted in the past, but manages to make it sound like it's the latest thing.