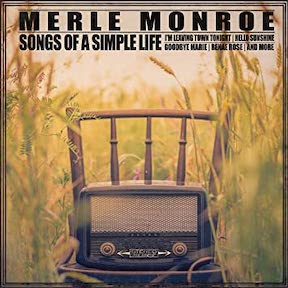 For those who haven't yet picked up Merle Monroe on their bluegrass radar, the first item of business here is to point out that this is not about a front man and his backup crew, not "The Merle Monroe Band" or "Merle Monroe and his Band." It is the collaboration of a pair of well-traveled bluegrass veterans, banjo player Daniel Grindstaff and guitarist/songwriter Tim Raybon (brother of longtime Shenandoah lead singer Marty Raybon), and the band's name pays tribute to the "Lonesome Fugitive"-style country sound of Merle Haggard and the high octane traditional sound of bluegrass founder Bill Monroe. Similar to the way that Lester Flatt and Earl Scruggs used to describe their distinctive sound as "American music," Merle Monroe is all about melding "classic" country with "traditional" bluegrass.

This follow-up release to 2019's "Back To The Country" (also Pinecastle) features a dozen tracks, seven written by Raybon, with a backup cast that includes bluegrass A-listers like Trey Hensley, Andy Leftwich, Josh Swift and Harry Stinson (borrowed, it appears, from Marty Stuart's band).

The arrangements and production are excellent throughout with good drive on the up-tempo cuts and a nice soft touch on the slower tunes. Raybon's lead vocals are engaging and satisfying, but the core of the band's sound is the harmony he and Grindstaff dive into on songs like Raybon's "Renae Rose." It's the kind of vibe that invites favorable comparisons to contemporary peers like Dailey and Vincent as well as to pioneering bluegrass acts like the Osborne Brothers.

Despite the band's name, it might be considered a surprise that none of the non-Raybon tunes were written by either one of them, but they do pay tribute to mainstream country icons like brothers Vern and Rex Gosdin ("Roll On Muddy River"), Don Gibson ("I'd Be A Legend In My Time") and Lefty Frizzell's 1964 hit "Saginaw Michigan" (written by "Whispering Bill" Anderson and Don Wayne).

As in baseball, music business people like to talk about the "sophomore jinx" or "second album curse." Nothing of the sort here, this is at least as good an effort as the debut.