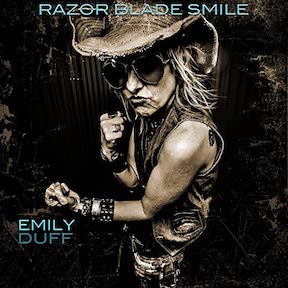 New Yorker Emily Duff has brought out Eric "Roscoe" Ambel's twangy side on "Razor Blade Smile," much as in 2018's "Born on the Ground." When the guitarist/producer gets behind a project, one need take notice. Duff, the rising singer-songwriter, now 32 years sober, has seen plenty of hardship and can look back now from the point of view of a happily married woman and mother. She's a mother who never had one. Duff had to figure it out on her own, perhaps finding her salvation at the late CBGBs club.

Call her the female equivalent to Willie Nile in that NYC rocking poet role. Her attitude and feisty appearance (frayed straw hat, clenched fists, sleeveless torn denim on the cover) will remind of early Lucinda Williams. Call her a country rocker or punk country gal instead; the fact remains that she can pen terrific songs.

With Ambel (Steve Earle, Del Lords) steering this session, bassist Keith Christopher (Lynyrd Skynyrd), keyboardist Charlie Giordano (Bruce Springsteen), drummer Phil Cimino and Mary Lee Kortes on background vocals add to the firepower throughout, on vivid display in the opener "Go Fast, Don't Die," which like "Gimme Back My Love" which follows and many of Duff's songs, has memorable, lingering infectious hooks.

Duff balances the hard-driving sassy songs such as the title track and the frenetically driven "Flying Paper Planes" with well-crafted gems such as "Angry To Bed," "Another Goodbye," "Don't Hang the Moon" and to a lesser extent "Done and Done," which has some deceptively bitter lyrics buried in the melodic hooks. She has a knack for that killer line that just grabs such as "I don't care what your best friend said" in "Angry to Bed."

She even proves to be contemplative in "Another Goodbye," taking a rather conventional, Nashville-like country path on "Feelin' Alright," and finds her signature footing in "Don't Hang the Moon," with a tale of someone who lives and loves their own way. Cody Nilson joins on pedal steel guitar for the gently strummed, cautionary closing "Nicotine & Waiting." Duff's trajectory is rising. These tough, hard-as-the-street new songs have a slightly softer, or at least more carefully rounded, edge than those of her last outing.