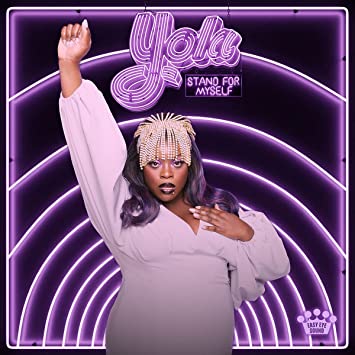 For most of us, Yola arrived in 2019 without fanfare; we encountered "Walk Through Fire" and were simply blown away. An unmistakeable, irresistible mix of soul, blues and country, her interpretation of modern Americana was refreshing and timely.

"Stand For Myself" is more of the same, but the spiritual volume has been cranked — soul, gospel and R&B flavors even more pronounced, country roots elements infused universally. While dance floors may fill when these songs are played, one senses the messages behind the music are as significant to Yolanda Quartey.

Yola and producer Dan Auerbach of The Black Keys have taken the spirit of the '60s 'bigger is better' Nashville Sound and mixed in the dance-friendly, heavy beats of Northern Soul to create a mighty, confident approach unique to the Bristol, UK-native, Nashville-resident. Yola's voice, her instrument, is finely tuned, boldly challenging listeners to hear her treatise. Not content with subtlety, Yola is laying out the truth:

"Everybody's saying
That it's gonna be alright
But I can't help but wonder
If it's gonna be on my dime
We are the poor ones
Rowing up against the tide
Burning our reserves of courage
And working just to make it alright
When we know it isn't..."

Co-written by Yola, Auerbach, Aaron Lee Tasjan and Natalie Hemby, "Diamond Studded Shoes" is as central to "Stand For Myself's" unifying theme as any individual song. A call to action for allies and the oppressed alike, Yola and her compatriots are no longer willing to accept that which is offered: "They buy diamond studded shoes with our taxes, anything to keep us divided..." she sings. Now is the time for honesty: what are we going to do about it?

Deep grooves of the Muscle Shoals/southern soul variety from Aaron Frazer (drums) Nick Movshon (bass) and Ray Jacildo (organ) unify these 12, wide-ranging songs. The lyrics may be heavy, but the mood is joyful, expressive and accepting. The songs and performances do not waver. "Barely Alive" opens the album with a Sammi Smith-vibe, but as the album progresses, we hear fewer familiar touchstones: excepting Amythyst Kiah's powerful "Wary and Strange," nothing as remotely distinct as like "Stand For Myself" has been encountered this year.

Every song impresses with "Break the Bough," "Be My Friend," (on which Brandi Carlisle contributes background vocals) and "Whatever You Want" singular highlights, appealing one hopes to both 'traditional' country audiences and those embracing the wider view of Americana. The McCrary Sisters and Auerbach also appear on select numbers.

One best experiences "Stand For Myself" as the album it was intended, playing start to finish, its challenges and celebrations revealing themselves across 46- intensely enjoyable minutes. Initially one may hesitate because this album isn't "Walk Through Fire." That's true; unexpectedly, but thankfully, it's better.