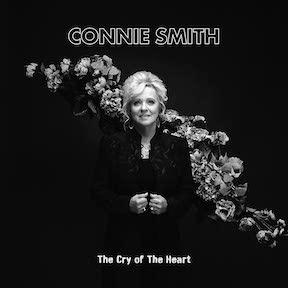 Many would argue that Connie Smith is the greatest living female country singer. The opening sentence in her liner notes to "Long Line of Heartaches" is "I believe that country music is the cry of the heart." A decade later, it's as if she hasn't missed a beat, coincidentally or more likely intentionally, entitling this effort, "Cry of the Heart." According to her husband and producer, Marty Stuart, Smith is content to take her time and only make a record when she feels it and has the right set of songs.

The catalyst for that right set of songs was, as it typically is, a Dallas Frazier song "I Just Don't Believe Me Anymore," an infectious honky-tonker, and rather incredibly, one of 72 Frazier songs that Smith has cut to date. Another highlight is the opener, "A Million and One," originally broadcast on a 2014 broadcast in the final season of The Marty Stuart Show where she joined Stuart and His Fabulous Superlatives on stage. The a cappella beginning is the perfect way to welcome her quintessential country voice. Although she takes the vocal alone here, she does deliver two songs she penned with Stuart, the stomping, gleeful "Here Comes My Baby Again," and the weeper "Spare Me No Truth Tonight."

Smith's long-established stature allows her to tap the very best in Music City, and she is quick to attribute her classic sound to them – pianist Hargus "Pig" Robbins who has accompanied Smith since the mid-'60s, filling in the lower register so well as typified in Mel Tillis' "All the Time" and pedal steel player Gary Carter where you hear the call and response between her voice and his instrument or in the ballad "Heart, We Did All That We Could" where they are practically paired as a duet. Listen also to Carter's bent notes to cap "Three Sides."

The mostly acoustic "Jesus, Take a Hold" from Merle Haggard closes the release. Smith usually adds a religious tune, but It's not so much a gospel song. This is more a recognition of our troubled times, pleading that we gain some sanity and regain a moral compass. While all that precedes it could be considered "classic country" of any year, Smith reminds us that she is still very much here and now. For that, we say "Amen."