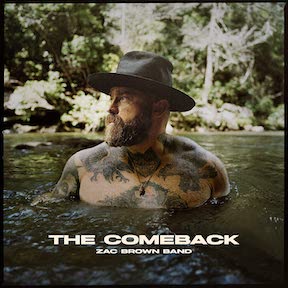 If you have even a passing familiarity of Zac Brown's personal history starting around 2018, you know the inspiration for this CD's title. First, Brown's 12-year marriage collapsed. Then, the world shook its collective head when he released a solo pop record ("Controversy") simultaneous to a ZBB release ("The Owl"). Why saturate the market with oneself, especially when the solo outing was a mess? The cover of that pop/hip-hop experimentation said it all: Brown, in a bearskin trapper's coat, glaring at his customer. He invited scorn, and, boy, did it show up. The online community was not kind.

So, this is the equally-predictable redemption record, a dangerous, but sometimes necessary proposition by even the best. Fortunately, Brown is indeed one of them, with a long pedigree of hits (seems like radio never did stop playing "Chicken Fried") and a deep well of musical ability.

The band opens with a big swing, in the pop-guitar crunch of "Slow Burn." It sounds like one of those room-filling songs of Brad Paisley like "Perfect Storm"played double-speed. While not fit to join the pantheon of ZBB's best, it's a return to form compared to those other diversions of late. Another highlight is "Wild Palomino" – smiling through the sadness, Brown reflects on the one that got away with porch-rocking acoustic guitar and harmonies.

It's quick to hear that there's far too much of a good thing on this record at 15 songs – a good 10-song album is definitely present with some ho-hum throwaways put in the pot for good measure. The single "Same Boat" calling for some political and national unity has already found its deserved audience. But tunes like "Us Against the World" and "Closer to Heaven" are just too dull arrangement-wise (even with guest Gregory Brown helping on the latter) to mine much emotion. A much better choice is the gorgeous Jimmy Buffett meets James Taylor number "Love and Sunsets." The award for most redneck tune is the bluegrass burner "Fun Having Fun." In a couple of choice lines, Brown writes, "If you're smart you might miss the thrill of blowing things up," and "The worst decisions make good stories." He's right, and someday he'll have to really tell what he was thinking in that fur trapper's coat.