Live from the Troubadour (Surfdog/Big Machine, 2021) 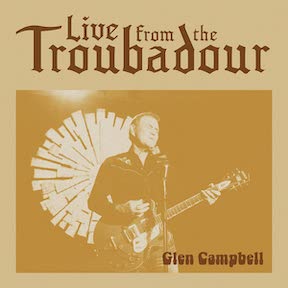 The setlist from Glen Campbell's Aug. 19, 2008 show at L.A.'s Troubadour consists largely of unfamiliar material as the focus was primarily on tunes from the current release at the time "Meet Glen Campbell" on which Campbell covered artists as diverse as Tom Petty, Lou Reed and John Lennon.

A trio of Jim Webb tunes are amongst the nicely represented hits. Campbell introduces "By the Time I Get to Phoenix" by proclaiming "this is one of my favorite songs that I recorded written by the great Jimmy Webb," which prompted a cheer from the audience, as did the announcement mid-song "I wanna play one" before he ripped into a smoking guitar solo. Leading into "Galveston," Campbell acknowledges that without Webb's contributions "I probably wouldn't be up here singing these other great songs," and with "Wichita Lineman" he proudly boasts that "it was the most played song of the millennium, and I got to sing it."

On John Hartford's "Gentle On My Mind," Campbell mocks himself with a high-pitched "Hi" reminiscent of the opening to "The Glen Campbell Goodtime Hour," and recalls "I actually heard this on the radio, an album cuts station in Los Angeles, I almost wrecked my car" in introducing Larry Weiss' "Rhinestone Cowboy."

Of the covers, the tune that most closely resembles the Campbell catalogue is Petty's "Walls," featuring a nice lead guitar solo from Todd Youth Schofield (who died in 2018) that recalls Campbell's style. Campbell is historically incorrect when telling of Yoko Ono giving him "Grow Old With Me" in thinking the song had never been recorded by John Lennon, but his rendition is moving particularly with the background vocals provided by daughters Ashley and Debby Campbell. Another point of confusion for Campbell came as he introduced "Jesus" by saying "this one was by, who did this?" before being reminded it was by the Velvet Underground.

Other standout covers include Green Day's "Good Riddance (Time Of Your Life)", Foo Fighters' "Times Like These" and Paul Westerberg's "Sadly Beautiful." Though by 2010 Campbell would be diagnosed with Alzheimer's disease, on this night in 2008, his strong voice and elite guitar playing remained fully intact, and he engaged nicely with the crowd in a thoroughly entertaining performance.