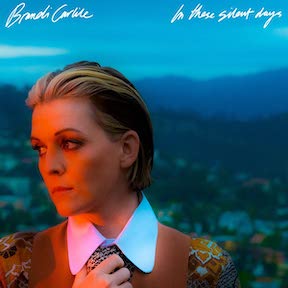 Brandi Carlile many times plays the wise (elder?) sage on "In These Silent Days," an album filled with folkish music and much good advice. She sings amazingly well throughout; she could do that without even trying. There are plenty of memorable songs, too, which makes it amount to a fully satisfying album.

The best track is also its shortest. Titled "Stay Gentle," it's one written a little like a sequel to Lori McKenna's "Humble and Kind." It's sung as a lullaby and is just as gentle as its title. It's sung in the voice of a mother to a child, and it'll leave you feeling warm and loved. "You and Me On The Rock" (which also features vocal help from Lucious), is built on an obviously Joni Mitchell-inspired acoustic guitar part and vocal. It's a love song about having a solid foundation in a couple's relationship. Sure, it's sonically derivative, but – as they say – if you're going to steal, steal from the best. It's becoming a tradition for Carlile to include at least one showstopping ballad on her albums, and "Right on Time," a piano ballad, kicks off the record with another goosebump-inducing Carlile vocal.

Everything on "In These Silent Days" is good (if not great), so your favorites may change from listen to listen. "Broken Horses" sports Carlile's rocking-ist lead vocal, whereas "Throwing Good After Bad" closes the project with hushed beauty. The only near misfire is "Sinners Saints And Fools," which sometimes sounds a little too much like an overly dramatic Helen Reddy-styled anti-fundamentalist rant. Carlile makes it work, but just barely.

The album was produced by Dave Cobb and Shooter Jennings, who have found a winning, unbeatable formula to making great Brandi Carlile albums. "In These Silent Days' truly is the perfect way to break the silence (perhaps, code for the pandemic?) with powerfully joyous music.