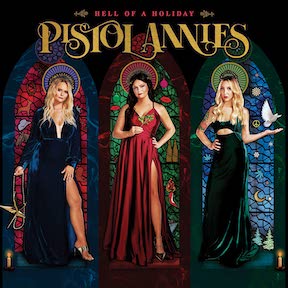 You just knew a Pistol Annies' holiday album would be a little bit twisted. Sometimes more "Merry Christmas from the Family" than, say, "Silent Night." Comprised of three song female voices – Miranda Lambert, Ashley Monroe and Angaleena Presley – "Hell of a Holiday" is mostly the sound of a group that just wanna have fun during the Christmas season.

The album opens with its title cut, where these women get revved up for Christmas over a pounding drum rhythm and lots of twangy electric and steel guitar. The album includes a cover of, perhaps, the saddest country Christmas song, "If We Make It Through December." There's also a straight-gospel song, "Leanin' On Jesus," which is powered by churchy organ and piano and black gospel double-time singing toward track's end. It's followed by the hushed and beautiful "The Only Thing I Wanted," which describes an adult Christmas wish list item wonderfully. "Believing" also expresses a child-like faith in Christmas magic that is, well, quite believable.

The only concessions to holiday music expectations include "Sleigh Ride" and, perhaps, closer "Auld Lang Syne." But for the most part, this is an album of either new or unfamiliar holiday musical expressions. The single "Snow Globe," with its hand clap rhythm, even sounds like – in a perfect world – a holiday hit song. Heaven knows we're tired of the same old holiday songs played on the radio year after year.

With "Hell of a Holiday," Pistol Annies once again live up to their billing as an all-star trio. This is not just a holiday one-off; instead, it's one more wonderful Pistol Annies album. In a word, a gift.