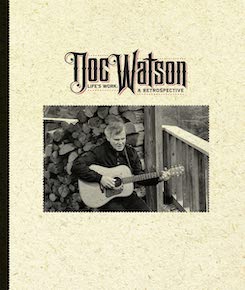 With the centennial of the birth of Arthel "Doc" Watson looming just around the bend in March 2023, it's likely that this new collection of recordings by the legendary blind guitarist and singer from North Carolina is at the head of a parade of similar compilations and remembrances, and that's all to the good.

A full recounting of his career is way beyond this review, but a quick Google search will yield enough hits to keep you busy for quite a while. Likewise, the 88-page booklet by producer and historian Ted Olson that comes with this set provides a great deal of perspective on the life and music of a man who did not emerge on the national stage until nearly his 40th birthday, but over the course of the next half-century until his death in 2012 was among the most iconic and beloved figures in American music.

Even in the comparatively laid-back world of folk and old country music he inhabited, in which few artists travel with bodyguards and entourages, Doc Watson was among the more approachable performers, particularly by his audiences. When approached for autographs, his invariable response would be to stick out his hand and say, "My handshake is my autograph."

Among his peers, he was in never-ending demand to "sit in" on a session, whether in the studio or on stage. Everybody wanted to "pick with Doc," and "Life's Work " includes a healthy sampling of the many people who got that opportunity – Chet Atkins, Alison Krauss, Ricky Skaggs and Bill Monroe, to name just a few. And, of course, there's plenty of material drawn from the partnership with Doc's late son Merle, from the 1960s up until Merle's tragic death in 1985.

With the exception of the opening track of the first disc (four discs in all comprising 101 tunes), all of these recordings have been previously issued on albums and compilations as part of a Watson catalog that now numbers in the dozens. That single, previously unreleased recording is "The Precious Jewel" from the early 1940s, with a teenaged Doc giving a glimpse of the talent that would make him a legend two decades later. If you are a devoted "Docaholic," the likelihood is that you already have multiple copies of many of these cuts on both LP and CD. "Life's Work" captures Watson in the studio, on stage, as a solo and as part of hundreds of collaborations over 50 years. Some may quibble with some of the selections – "Why this one and not that one?" – but the truth is, there's enough vintage Watson material to fill a dozen discs, and everything here is representative and worthy of inclusion.

The four discs follow a progression through the decades, so even if you do already have most of these tunes, it's worthwhile to have them gathered in one place, and in this sequence – perfect for long road trips (if you still have a car with a CD player). If you're a millennial just in the process of discovering the arguably greatest guitar player in American history, "Life's Work" makes an unbeatable starter set.