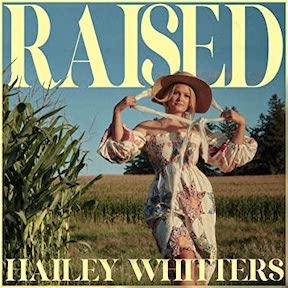 Hailey Whitters' "Raised" album is very much a biographical collection. From the title cut to the extended family sung about during "Big Family," Whitters sings again and again about her relatives and upbringing. She doesn't have to say the words 'small town' for the listener to know without a doubt she's telling us about country living. It's also an album built upon solid, traditional instrumentation, which makes it all the better.

You just gotta love the fiddle and steel guitar that colors "Everything She Ain't." It's a 'I'm better than her' lyric, without ever getting all angry and nasty. Instead, it finds Whitters calmly reminding her revival that this other girl's just not a worthy opponent. Although some of her songs veer a little to closely to being lyrical list songs, as happens during "Everybody Oughta," Whitters consistently sings everything here with downhome sincerity. Most of these songs are written well.

Whitters isn't intent on proving that her upbringing is better than anyone else's – especially that of city folk. Rather, she's merely telling it like it is – so take it for what it's worth. One of the standout songs is titled "Pretty Boy," which distinguishes itself immediately as a piano ballad (not an acoustic string accompanied tune). One can take it as an empathetic ode to gay boys, even though she never specifically says the word gay or homosexual in its lyric. Instead, she sings about an effeminate youth, who may or may not be gay. He's just different from typical males, particularly the more masculine, toxic variety. You don't have to be a gay rights supporter to love this song. You only need to appreciate the empathy expressed with it.

One of the more lyrically country songs ("The Neon," which addresses drowning sorrows in alcohol) is actually also one of the project's least country sounding – even with Lori McKenna's name listed on the writing credits. Its pop-leaning sound is the exception, though, rather than the rule. For the most part, "Raised" is one fine country album.