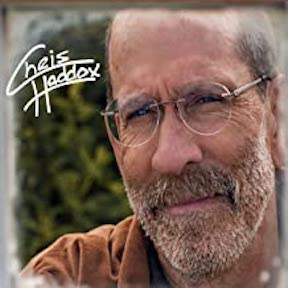 This self-titled debut from Chris Haddox, a West Virginia University professor and former Habitat for Humanity executive director, has been incubating for a long time now. Five decades plus given that he wrote his first song as a second grader. Haddox hails from West Virginia, writes honest story songs, sings them unpretentiously and backs it up with excellent acoustic and claw-hammer banjo picking.

Haddox cites five other musicians in his core backing band and 16 others who add instrumental or vocal touches to select cuts. Among them are mandolin virtuoso Johnny Statts and Dobro master Chris Stockwell as well as Mountain Stage band members Julie Adams, Ammed Solomon and Ron Sowell, who also produced and contributed liner notes. Despite the armies of folks in the wings, the sound comes through uncluttered and well mixed.

Although most of his material is eminently relatable, it's also refreshing as he writes about common day subjects that others rarely touch. For example, "Sunday Morning Stoplight" is about the choice of being law compliant or running the light on an early, empty Sunday morning street. His sense of humor appears in "Money Tree" where he futilely wishes that those leaves that he's raking were pieces of green, green money. He gets serious too with the cello/fiddle/accordio- imbued "Kalashnikov" about the man who invented the AK-47. He becomes personal in the opening bluegrass romp of "Says You, Says Me" about an assessment of presumably his own marriage.

His West Virginia connection is evident in many songs – planting trees on a mountain top removal site in "Streets of Danville," a conversation with a long-time resident of White Sulphur Springs about the devastating flood on 2016 in "O' This River," and most vividly in "Life Without Me," a call to action, inspired by the 2016 Presidential campaign about the future of the environment with or without coal. Yet, he saves the most inventive song for the closer, "A Soul Can't Rest in Peace Beside the Four Lane," a nod to the passage of time and implied environmental damage from the perspective of a spirit buried in a cemetery bordering I-78. Haddox claims to have begun to write the song at age 16, finishing it nearly 50 years later as the idea gained clearer focus. That alone says so much about the craft and care that went into this remarkable debut as Haddox begins his seventh decade.