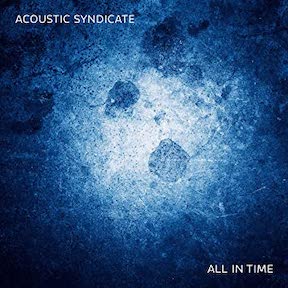 North Carolina's bluegrass/roots fusion band Acoustic Syndicate has been making music for over a quarter of a century. Yet, "All in Time" is their first album in nine years. Theirs is a stew of southern roots music and doses of improvisation, not unlike a jazz group, especially in a live setting. Their ability to put a stamp on a diverse set of covers, part of what they offer here, is akin to Los Lobos, and they even do one of that band's cover staples, the Grateful Dead's "Bertha". But six of the nine are written by front man, Steve "Bid Daddy" McMurry who plays guitar and sings lead and his cousin Bryon McMurry (banjo, guitar, vocals). Bryon's brother Fitz McMurry (drums, vocals) and longtime bassist Jay Sanders comprise the band. The three-part blood harmony is their signature sound, but there's plenty of stellar picking and musicianship too.

The opening title track features steadily plucked banjo and a soft lead vocal elongating the lyrics brightened by the three-part harmonies and sharp acoustic guitar before it builds into a glorious crescendo, only to return to its humble beginnings. Bryon McMurry takes the lead on the rocking "Bright Lights," replete with electric guitar while the mid-tempo banjo driven, acoustic "Bring Me Home" has the back porch feel and a catchy harmonized chorus, the closest we get to bluegrass on this outing. Willie Nelson's "Flying Too Close to the Ground," floats on the great harmonies and guest Matt Jennings' B3 organ.

"Man Inside" rumbles along, driven by Sanders' robust upright bass, soaring harmonies and terrific banjo and guitar picking as the band is totally locked in. "Simple Dream," another of Bryon's, glides and glows blissfully and the last original, "Sunny," brings in guests Lindsay Pruett on violin and Brian Felix on piano for another of the band's hazy and at times hypnotic psychedelic vibe. Fitz's insistent snare beats and Bryon's energetic Bela Fleck-like banjo drive a faithful, rocking take on "Bertha," and they rev it up even further on Lou Reed's "Rock and Roll" with Bryon's banjo in otherworldly territory, bringing an explosive climax.

Having seen them live, it's astounding how they capture that same energy in this studio recording. Let's hope we don't have to wait nine years for the next one.