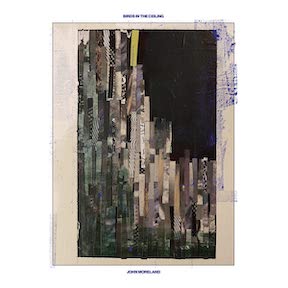 John Moreland oftentimes gets lumped into the Americana genre, probably because he doesn't really fit anyplace else. Although he's from Longview, Texas, he's recorded for the alternative label 4AD in the past. That's a British imprint better known for alternative acts, like Cocteau Twins and The Pixies. Moreland's music isn't anything like those. Then again, he's not exactly all that country – traditional or otherwise -- either.

With that said, the title track, "Birds In The Ceiling," features the somewhat traditional folk arrangement of acoustic guitar and vocal. Then again, it also throws in some strange sound effects toward song's end. Moreland's traditional playing is many times accompanied by electronic keyboard elements. The last line in the last song is "Life is a beautiful question." Quite surprisingly then, after an album's worth of relatively depressing songs, Moreland concludes the project with on a decidedly positive note.

Opener "Ugly Faces," finds Moreland admitting, "I learned how to lie watching you." He also sings, "I couldn't hear you calling/The bullshit was so loud." This is the sort of blunt honesty we've come to expect from Moreland. He doesn't pull punches. This opener is built upon persistent drumming and keyboard, with only sparse guitar. It's a desolate first piece. It's followed by "Lion's Den," which incorporates percussion more often found on synth-pop tracks. Nevertheless, the one consistent factor throughout is Moreland's voice, which applies only about two tones: sad and sadder. Then again, he paraphrases The Stones with that down-in-the-mouth approach on "Generational Dust" when he murmurs, "It's only rock and roll/But you like it."

At one point, Moreland states how he feels like a man without a nation. And to his point, he many times sounds just plain lost. No, there's little joy to be found here. Nevertheless, pain has rarely sounded quite this smart.