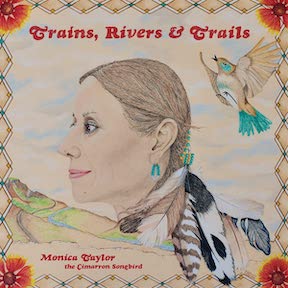 Oklahoma roots royalty turn out to support Monica Taylor, dubbed "The Cimmaron Songbird" for "Trains, Rivers & Trails," her third solo album and ninth overall, coming near Woody Guthrie's 110th birthday. While there are a dozen musicians and singers in the credits, suffice it to say that string master Jared Tyler, keyboardist/singer-songwriter John Fullbright and bassist Casey van Beek are among the supporting cast. Hers is the essence of "Red Dirt" music, the kind we associate with the aforementioned as well as the late Jimmy LaFave and Bob Childers, who gave the genre the nickname.

Taylor wrote or co-wrote seven of the 11 tunes with well chosen covers of Woody Guthrie (of course), John Hartford, Roger McGuinn and the standard "Down in Louisiana." With her story songs about movement and journeys, she begins with "The Sound of a Train," accompanied by Tyler's distinctive Dobro, which we've heard on so many great Malcolm Holcombe albums. Later, powered by Luke Bulla's fiddle, "Train Take Me Away," is a wide-ranging travelogue that still retains the aim of returning home

Her spare arrangement of John Hartford's "Gentle on My Mind" is folksy and unpretentious. Her story telling comes front and center with the emotive "Salty Tears," inspired by her great-great grandmother and her own Cherokee heritage referencing ethnic cleansing and the Trail of Tears. The closer, "The Ocoee Love Song" is a Civil War love song about the women of war left at home.

The single, "Rescues" is one of the saddest stories you'll hear about a homeless man who lost one of his dogs, the mother of the puppy, paid off by the chorus "Give a hand, give a heart, give a care...We're all rescues." Dobro and harmonica weave in and out to give McGuinn's "The Ballad of Easy River" a bright uplift. Fullbright shares the vocal on Guthrie's "Minor Key," a more straightforward take than the famous bleaker one by Billy Bragg and Wilco. The entire collection rings genuine through this mix of Taylor's storytelling and the traditional musicianship.