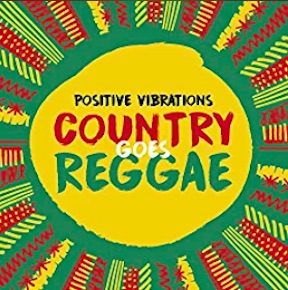 Successful musical mashups can oftentimes turn into viral videos. The creative audacity of mixing and matching diverse genres can many times produce unlikely musical magic. With "Country Goes Reggae," producers Christian and Frank Berman (The Berman Brothers) and partner Ron Oehl have combined big country star vocals with talented reggae musicians that have played with equally legendary reggae artists, including projects with Ziggy Marley and Burning Spear. The result is, if not always magical, at least are a whole lot of fun.

Much of today's country music carries with it a very similar island vibe. For instance, Kenny Chesney's recent stadium stop featured a Bob Marley album as between-act music and felt perfectly appropriate for the event. The songs that work best on this 11-song collection are the ones already party-ready. Uncle Kracker's "Smile" rolls like a smooth sailing yacht trip, while Toby Keith's drinking anthem, "Red Solo Cup," is nicely sweetened with a horn section. This same horn section is applied to Lainey Wilson's "Things A Man Oughta Know," but never comes close to negating the original's more serious tone.

Although it's fun to hear "Ready To Run," this one is sung by Alexandra Kay, not The Chicks, which is disappointing. Dolly Parton sounds to be having the most fun of any of the artists with her reggae-ized "Two Doors Down." She even rerecorded her vocal just for this new version. Call it party-envy, Jamaican style.

If you over think it, putting country songs to a reggae beat changes the music's genre completely. The only country part left is the vocal, after all. However, it's likely not wise to think too much about the true nature of this music. Instead, crank it up and have a good time by enjoying many familiar songs in an entirely new light. Just learn how to skank in cowboy boots.