Laura Benitez and the Heartache 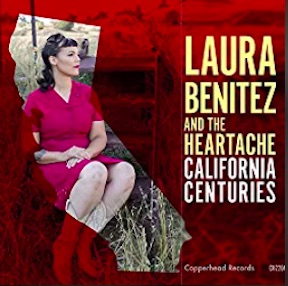 Laura Benitez, the frontwoman for her band The Heartache is getting braver with each release, this her third album with the band and fourth as an artist. While past albums were mostly third person stories about fictional characters, Benitez wanted to get more personal and delve into some issues that she feels strongly about. The major themes are denial, gaslighting and hard romantic lessons learned. The Californian deals with the lies you tell yourself to keep a doomed relationship alive, with psychological manipulation and challenging the negative perceptions of others. Not only that, but her classic country sound has broadened to include bluegrass, folk, and rock. She's got all the instrumentation in her band to lay down all those styles with twangy guitars, fiddle, pedal steel and drums.

The opener, "Bad Things," deals with collective denial as it was written just a few days before the pandemic shutdown in March 2020. She writes about things we think wouldn't happen, but did. Musically, the tune floats and bounces along riding the steel guitar waves. She cleverly takes a shot at male-dominated conservative country in "Gaslight (We Shouldn't Talk About It)" which was written after the mass shooting in Las Vegas, but also delves into the police brutality at the heart of the Black Lives Matter movement and even the #metoo movement. The melody is purposely upbeat with plenty of vocal gymnastics, but lyrically, she is pushing for social change and by implication scorning those who don't.

There are love songs too. The folk lullaby "All Songs" was written to honor her and partner's Bryn Kilgore's young daughter. At the time she wrote it, they were living in a trailer in their driveway while the house was being renovated, feeling as if they might be consumed by the wildfires in September 2020. "A Love Like Yours" is for Kilgore, a long-distance cyclist where distances of 100 miles or more are called centuries, thus the album title.

The outspoken lyrics are masked by the jangling, flowing music, and Benitez's smooth, strong voice makes for an infectious listen. Her love for performance and live shows comes through on the final track "I'm With the Band," where Ian Sutton's pedal steel carries the song into classic country heaven, reminding us how good this music sounds when the entire band plays so joyously.

CDs by Laura Benitez and the Heartache