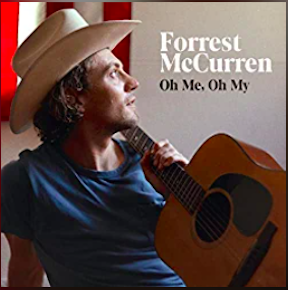 Forrest McCurren looks like a young man, but sings like a much older person. He has a roughened voice that sounds nearly just like John Prine's at times, and his detailed songs are utterly believable slices of life. You feel like you're visiting McCurren's blue collar neighborhood; one that is unquestionably very real, unlike the old imaginary Mr. Rogers' hood.

The title track is a fingerpicked acoustic guitar-driven meditation, colored by steel guitar, and it details McCurren's desire to turn over a new leaf in life. He sings about leaving his rowdy friends behind, getting out of the big city and even purchasing Nicorette gum in order to finally give up those cigarettes. McCurren then ups the tempo for "Heavy Old Hearts," which describes a hard-living lifestyle. With "Pray for Sun," the track incorporates plenty of fiddle and steel guitar, as it expresses McCurren's practical approach to life. "Pray for sun," yes, "but prepare for rain."

McCurren also has a dark sense of humor. If he should die, he advises at one point, he wants to make sure those he leaves behind not forget to brush their teeth. This advice sounds more like something a mother tells a young child in the morning before school and not what one adult tells another – especially while facing human mortality. It's a comment that comes out of left field and is funny, but in an odd sort of way.

During "Pray for Sun," McCurren posits, "Life is messy/It's gonna leave a stain," and his songs explore life's high marks and also its ugly blemishes. It's an album of warts and all, indeed.