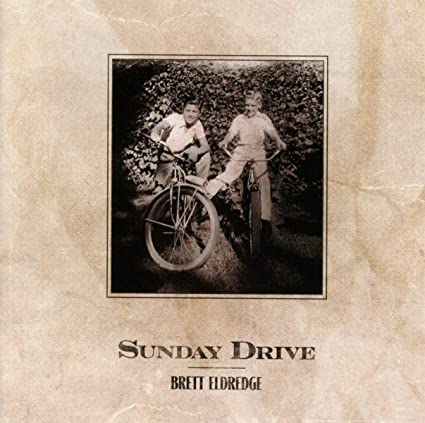 When an artist achieves the kind of commercial success that Brett Eldredge has, there seems to inevitably be an album that is all about the songwriting. Having described his 2017 self-titled album as his "most honest collection of songs," he doubles down on the sincerity factor and bills "Sunday Drive" as his "most deeply personal to date." The distinction is a fine line, but it seems to be in the deliberateness of the preparation.

Eldredge embarked on a voyage of enlightenment, staying in a cottage for two weeks to avoid distraction and to cleanse his mind, body and soul.

He sets the tone with the lead-off track, "Where The Heart Is." It is a simple plea for unadulterated truth. With the aid of a small string section, it is sonically gorgeous. However, the chorus repeats the song title four times, and there are four choruses. He seems to be driving the message so hard that it does not feel organic.

The ballads are generally a pleasant listen. "Fall For Me" is radio-ready, but also has a lengthy chorus and some cliched imagery. It bounces along so effortlessly, the listener may not notice or even care. He goes up-tempo on "Magnolia," which is reminiscent of his five chart-toppers. It is fueled by Daniel Tashian's capable mandolin and is the most country sounding song in the collection. Ironically, the excellent title track is the one that meant the most to him, but is the only song he does not have a writing credit on.

The collection may be his most deeply personal to date. It is introspective. but it is not a game-changer.