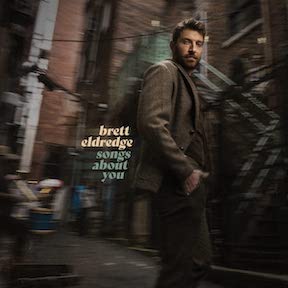 The title song for Brett Eldredge's "Songs About You" is a slow, soul song. Much of it is set in Chicago, with Eldredge walking city streets and noticing the various tunes being played on radio stations within earshot. And wouldn't you know it, every one of them reminds him of his recent breakup! Such is the case with many relationships – whether good or bad – as love songs can be so doggone relatable. It's almost like attending a Sunday morning sermon where you would swear the preacher is speaking directly to you. Not coincidentlally, much of this album sounds like '60s Chicago soul. The gentler side of vintage soul, that is, with sonic traces of acts like The Impressions sprinkled throughout.

Eldredge sounds a little like a Southern boy making a classic soul album. It's difficult to not fall under Eldredge's easy going spell on songs like "Where Do I Sign," which musically references a joyous, innocent era in music. "Get Out Of My House" finds Eldredge giving his soon-to-be-ex the old, 'outa sight, outa mind' treatment, as having this girl as his housemate only causes him emotional pain. And she's the one that's gotta go. Most everything is enjoyable, as Eldredge comes off vocally right in his element throughout. The only problematic inclusion is "Holy Water," as it's yet one more country song that uses already overused religious imagery to describe a heavenly relationship.

Most of this record is so good, in fact, people may one day hear one or more of its tracks and think, 'Hey, Brett's singing about us!'