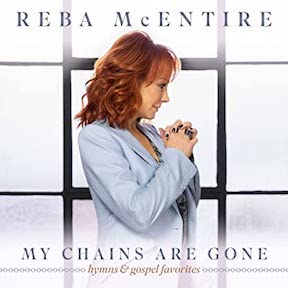 It's so good to hear Reba McEntire's gospel album so soon after Carrie Underwood released the similar "My Savior." While Underwood's release may have been her country-ist album – ever, perhaps – McEntire has strayed far less often from her traditional music roots. With "My Chains Are Gone," McEntire gives us a selection of songs she – like Underwood – grew up singing. Therefore, she knows them all like the back of her hand, the way Anglophiles can sing Beatles songs word for word without overthinking. She doesn't gussy these productions up much, either. If she visited your church backed by a country band, this is probably how it might sound.

The only selection here that sounds a little bit different than her Sunday morning upbringing, is "Amazing Grace/My Chains Are Gone," which was updated by Chris Tomlin for the "Amazing Grace" movie soundtrack. McEntire even breathes life into the old standard, "I'll Fly Away," which incorporates some nice fiddle and other acoustic instrumentation.

Although this album is not overburdened with guest artists, Kelly Clarkson and Trisha Yearwood add lovely vocal accompaniment to "Softly & Tenderly," which is performed, well, softly and tenderly. The Isaacs also join McEntire for the medley, "In The Garden/Wonderful Peace." The album ends with "Back To God," an acoustic version of that song, which also includes Lauren Daigle's singing. It's a quietly serious manner to finish out an album.

It's easy to take McEntire's singing for granted; she is so consistently great. She sings these songs both simply and beautifully. There's nothing edgy or unusual here. Akin to the Underwood album again, though, it's a set of songs that will resonate with current and former churchgoers. Many contemporary churches only sing current worship songs these days, so if you're missing opening up that dusty old hymnal in the pew pocket, this album can be your private, old time church service sing-along.