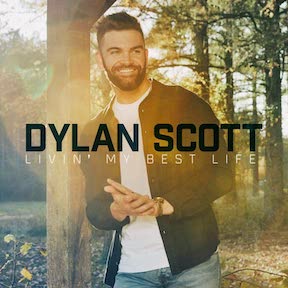 Dylan Scott's second album is a study in contradiction. "Livin, My Best Life" may seem unwieldy at first with 16 tracks, but it clocks in in just under an hour thanks to five songs that come in under the industry's three-minute Mendoza line. It also has an air of familiarity due to seven of the tracks having already been released.

At some point in their career, a burgeoning artist will bill an album as their "most personal to date" or their "most country sounding." This is neither. The collection is contemporary to its core with melodies that alternate between breezy and muscled up with with slick production.

It fittingly features co-write recredits from Florida Georgia Line. With FGL on hiatus, Scott could easily fill their shoes. He checks the bro country boxes straight away with "New Truck" and "Amen to That." In the former, the protagonist believes he can wash heartbreak away with a shiny new pickup that holds no memories of his ex.

Other highlights include "In Our Blood" with Jimmie Allen, and the number one hit ""Nobody" with its gospel thread and "Tough," one of only two songs that have female co-write credits.

The album title is fitting as it checks off the country boxes. The good news is fans will likely take to his less romantic side, The bad news is you've probably already heard a significant amount of the material and you would be best served as a bro country fan, assuming there is nothing wrong with that.